"Review of Pain Associated with Minimal Endometriosis"
From 2000 Journal of the Society of Laparoendoscopic Surgeons:
http://www.ncbi.nlm.nih.gov/pmc/articles/PMC3015350/
(bold and italics are mine)

**See below for a link to a video from Dr. David Redwine on the appearances of endometriosis- actual video from surgery showing what it looks like!)** 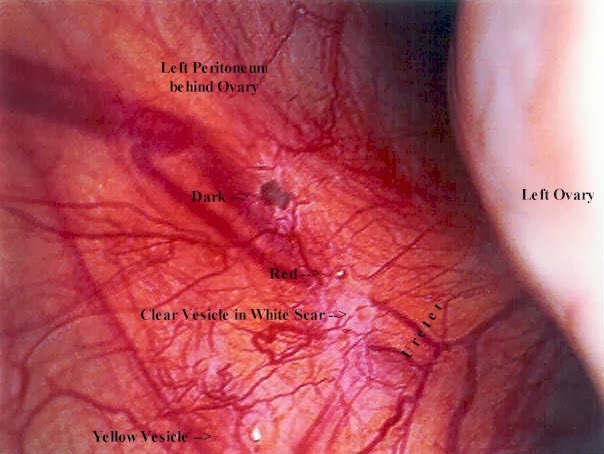 "A simple analogy that is often used to explain endometriosis to the patient is the example of the eyelash and the eye. The eyelash is a “normal” part of the eye and quite separate from the eyeball. Should a “normal eyelash” be placed on a “normal” eyeball, the eye becomes red with dilated corkscrew vessels. The eye becomes painful but continues to function, though not optimally. The eyeball returns to its normal state once the eyelash is removed. The body reacts in a similar manner when the “normal peritoneum” is exposed to the “normal endometrial tissue.” The peritoneal lining develops red lesions with dilated corkscrew vessels and becomes painful. The pelvic organs continue to function but not optimally, which can lead to infertility. The way to cure the problem is to find and remove the “normal endometrial tissue.” Although this analogy is not perfect, the patients seem to grasp the concept, since they have all experienced an eyelash in the eye scenario....

"Unfortunately, locating and removing the “normal endometrial tissue” has not been as easy as finding and removing the “normal eyelash.” In the early method of locating and treating endometriosis, laparotomy was the only approach to access the pelvis. Lesions, located with the naked eye, were biopsied and removed with marginal success5 in relieving the pain associated with endometriosis, since lesions, too small to be seen, were left untreated. With the advent of laparoscopy, new lesions were identified,6 including red and white lesions. Unfortunately, the identification of these new lesions did not improve the results of therapy to any great degree.7 Patients woke up from their surgery stating that there was no difference in the pain, or they had temporary pain relief for 6 to 24 months. More radical therapy, including hysterectomy and bilateral salpingoophorectomy, was recommended in the belief that the cramps originated in the uterus, and the endometrial tissue was encouraged to develop under the influence of estrogen from the ovaries. Although this improved the results of therapy, failures were noticed,8 and the pelvic pain and painful cramps persisted in many patients. Consequently, it was concluded that the pain and cramps must be of another origin since the uterus was removed. Patients were sent off for extensive bowel work-ups and were left with a diagnosis of irritable bowel syndrome, or were told that the origin of the pain was (“in her head”) psychosomatic.

"Researchers persisted to perusing the cause of the pain. Dr. David Redwine theorized that the pain originated from the peritoneum, and, if one removed the entire peritoneum, the pain would resolve. Success was achieved, but due to the extent of the procedure, the risk of adhesion and subsequent pain was still present. However, a significant finding in the pathology specimens, was that microscopic endometriosis was present in “normal appearing” peritoneum, and this was confirmed by Dr. Dan Martin and others. Finally, an explanation for the recurrence of the symptoms of endometriosis was found. These microscopic implants in the normal looking peritoneum were not excised since they were not “seen” and, thus, later developed into larger lesions, with subsequent recurrence of the symptoms of endometriosis....

"Initial work on mapping of pain associated with the endometriosis lesions resulted in some thought-provoking findings. The classic black lesions were found to be painful in only 11% of patients when the lesion was touched. Similarly, white lesions were painful in 20% of patients with red lesions at 37%, and clear lesions at 32% were the most painful (Table 1). These results added further reason as to why initial therapy had such poor results. Surgeons would only “see” the black lesions and removed them, but these were the least painful lesions. The most painful clear lesions were not “seen” at laparotomy and therefore remained, as did the pain. What became apparent next, while mapping the patient, was the fact that the pain extended 28 mm beyond the visible border of the lesion onto what looked like “normal” peritoneum ((Figure 1). Therefore, if the surgeon only removed the lesion at its border, the microscopic disease in the previously identified normal looking peritoneum was left, and persistence or recurrence of the symptoms was encountered.

"What is most interesting is that right-left orientation of the pelvis does not exist in some patients.12 That is to say, palpation of a lesion of endometriosis on the left side of the pelvis may produce pain that the patient perceives as being on the right side of the abdomen, and the opposite is also true. How many times has a laparoscopy under general anesthesia been done on a patient complaining of right-sided pain where the surgeon saw a normal looking pelvis on the right—only to wake up the patient and tell her, “I saw nothing on the right side of your pelvis that would cause your pain.” It now becomes apparent why the results of the survey of the Endometriosis Association's members revealed that the average length of time from the onset of symptoms to the treatment of the endometriosis was 9.28 years and an average of 2.3 operations.

"As has been shown over the years, results of therapy, based only on what the physician sees, is marginal at best, especially in minimal endometriosis (ie, stage 1 and stage 2).

"The data revealing the failure of the approach of “treat and see,” based on what the surgeon observed at laparoscopy under general anesthetic, is strong and reveals that a new approach is needed. An approach based on patient confirmed diagnosis and patient-based analysis of the results of therapy needs to be looked at in greater detail. The only person who knows where the pain starts and ends is the patient herself. She is also the only one who can confirm when the pain is no longer present."         http://www.ncbi.nlm.nih.gov/pmc/articles/PMC3015350/

Video from Dr. David Redwine on the appearance of endometriosis:
http://vimeo.com/62247222

Revive From Ashes And Rise